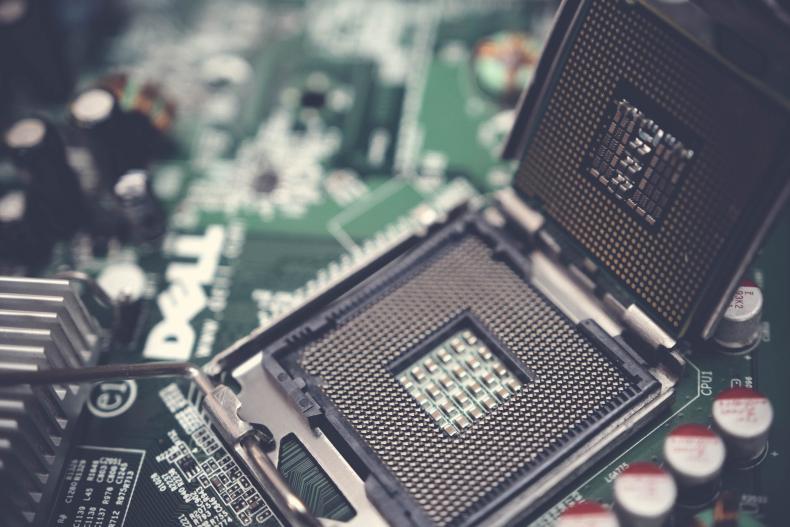 At our present point in media history, it appears that the location of audiovisual media for us in the weaelthy countries is in the process of shifting from the physical and substantial stages of movie theatres and television sets to the seemingly weightless space of the World Wide Web. At this point in history we would do well to keep in mind that the Web and other computer-interfaced media still rely on a material substrate. They are not “virtual” media. The audiovisual images they produce are not immaterial. I argue this because these media are composed of electrons, and because in their “low” and obsolete forms they call special attention to the materiality of their hard- and software platforms.

At their most fundamental, electronic media (and currently all computers are electronic, though this may change in the coming decades) are embodied physically by electrons. They are sometimes particles, sometimes waves, and they have very little mass, but electrons are physical entities. It may seem a bit perverse to descend to the subatomic level to assert the materiality of a medium, but as painting critics (famously Clement Greenberg) and film critics (famously André Bazin) claimed an almost magical power for works that asserted their material substrates, so I suggest that a work that asserts its electronic materiality holds claim to an indexical power of either mystical or political importance. (Perhaps both!)

Since I have referred to two critics who were sometimes considered to have abandoned their political views to a naive (Bazin) or Procrustean (Greenberg) formalism, I should explain why I am so eager to place electronic media within a similar discourse. Clement Greenberg is remembered as the champion of a genre of heroically scaled abstract painting in the United States in the 1950s-such as the works of Barnett Newman and Frank Stella-that respected the material constraints of their medium, such as the dimensions and flatness of the stretched canvas. He also used his influence to damage the careers of painters who did not follow the formalist imperative. Greenberg is less well remembered as the Marxist critic of the 1930s who argued that, in art, progressive politics required progressive form. During Greenberg’s career as a critic, his aesthetics appeared to shift from materialism to abstraction, but a sense of the materiality of the medium remained important to him throughout. Bazin valued the trace of the material world in the medium of film, through the indexicality of photography. He championed works that allowed the magic of the index to shine through, for example by minimizing editing. In these footsteps I wish to champion electronic works that foreground their physical and even indexical qualities.

But how do electronic images maintain contact with the materiality of their medium?

It is common to note that in digital media the indexical link between image and represented object is irrevocably severed. In photography, film, and analog video it is possible to trace a physical path from the object represented, to the light that reflects off it, to the photographic emulsion or cathode ray tube that the light hits, to the resulting image. In digital imaging this path is not retraceable, for an additional or alternative step is added; namely, converting the image into data that can then be manipulated, and thereby breaking the link between image and physical referent. In the digital image, it is not possible to track where and when particular interventions in the image were made. After an image is digitized, any iteration of the image may be altered, and there is no “generational” difference to alert us to the stage at which the change occurred. For many this qualitative change occasions fear for the status of the image as real. Practically, as a result of the potential digital alteration of any electronic image, video and photography can no longer serve as indexical evidence, for example in the courtroom. Theoretically, the semiotic foundation of photographic images in the real is thought to be destroyed in digital media.

These concerns are accurate, though it is exaggerating to see the advent of digital media as a watershed between truthful and constructed imagemaking, as historians show that these media have been tinkered with since their inceptions. What I question in the current rhetoric about the loss of indexicality in the digital image is that it assumes a concurrent loss of materiality of the image. As a result it is assumed that digital images are fundamentally immaterial, and that for example to enter cyberspace or to use VR is to enter a realm of pure ideas and leave the “meat” of the material body behind. Digital and other electronic images are constituted by material processes no less than photography, film, and analog video are.

When we look at the physical process whereby electronic images are constituted and transmitted, we find that it is indeed possible to retrace the path traversed by the image. Electronic imaging is indexical in the broadest sense, in that the medium bears the physical mark of the object whose image it transmits. This can be argued on the bases that not only do electrons exist (i.e. are not reducible to waves or to probabilities), but that, because of particle-wave relationship, all matter is fundamentally interconnected. Basically, I suggest that the analog or indexical relationship is maintained insofar as the activity of electrons can be traced to a wave function. When the wave function is broken, the indexical bond is lost as well. Yet we can still trace the basis of digital information in interconnected matter. (Here I have space only to assert these things, but they are argued at great length in “How Electrons Remember”, forthcoming in Millennium Film Journal, fall 1999.)

It is not too difficult to believe that analog electronic media retain some sort of indexical relationship with the object whose image they bear. In analog media, individual electrons/waves selflessly bear forth a unique quantum of information, such as a color or a pitch. But if we look carefully at digital media, we see that the indexical relationship is broken at two points. The first is when the image is digitized. Light waves whose frequency and intensity physically represent the color of the object are translated into symbols when the image is encoded in strings of numbers. Digitization breaks the analogical relationship between object and image, henceforth rendered as information. The second, and perhaps more crucial, characteristic of digital computers that breaks the indexical relationship is the same characteristic that makes computers accurate. Conventional digital computers cannot tolerate intermediate states between 0 and 1. Every circuit contains a “flip-flop” circuit that eliminates intermediate states by ignoring weak signals. Only a strong signal, the cumulative behavior of masses of electrons, registers a change in the circuit. In this herd behavior, any change in the state of an individual electron is obviated by changes in the whole. Digital computers boss electrons around. They deny their individuality. Indeed, in digital computing it would appear that the electronic materiality of the medium becomes moot.

I would simply suggest to readers that, although it no longer bears an analog relationship to its initial object, the digital image still relies for its existence on the fundamental interconnectedness of subatomic particles. Electronic images, like all of us, owe their material being to electrons and their associated wave forms. We are physically implicated in the virtual realms we inhabit, and far from divorcing ourselves from the world when we enter electronic spaces, we may be more connected than we imagine.

However, it is when our computers fail us that we are most forcibly reminded of “virtual” images’ physical being. The materiality of electronic media is most often evident to us not when everything is running smoothly but during the breakdowns and failures, the anomalies of low and obsolete technologies, and the ways electronic media are actually used as opposed to how they are imagined in the software manuals. A well-running platform, for those who can afford such a thing, has a false transparency that makes it quite easy to believe we are operating in a virtual realm.

The myth of transparency is in the interests of global corporations, Microsoft, Adobe, Sony, et al., who encourage computer users continually to upgrade our hardware and software and who rudely abandon us when instead we make do with obsolete platforms. For example, British art collective Redundant Technology Initiative, offers a rousing manifesto for obsolete computers and scoffed-at forms such as ASCII art, which makes drawings from regular keyboard characters. Visit their page, where they reveal a memo circulated by Microsoft urging customers to abandon ASCII art in favour of Microsoft's own HTML-based clip art. For a survey of ASCII art visit http://users.inetw.net/~mullen/asciiart.htm, which demonstrates the creative variety possible in this, our decade's electronic folk art.

Many digital artists fall into the upgrade trap and produce on-line works that are inaccesible to audiences who lack the necessary bandwith, memory, servers and plug-ins. Some, however, choose to work with low and obsolete electronic technologies. Low-tech on-line artworks thus assert the physicality of the medium, by foregrounding the platform on which they were built. Vuk Cosic's ASCII Music Videos, his site proudly announces, were built on an obsolete 386DX with 4 megabytes of RAM: see www.vuk.org.

Structuralism may be considered a rich person’s version of materialism, but some web artists use the established forms of off-the-shelf web “authoring” software to make clever, self-referential works-much as Greenberg’s favoured artists foregrounded the flat canvas and rectangular frame. At www.easylife.org, poems are built from strings of commercial web links (click on artwork number 4), and “Form Art”, also apparently the brainchild of the prolific Cosic, uses the click-and-send form familiar to on-line commerce to make maddeningly reflexive, unsendable “forms”. Web artists Jennifer and Kevin McCoy’s fake commercial web site, www.airworld.net, in development for the Walker Art Center in Minneapolis, scavenges its images and text from other sites by plugging buzzwords into a search engine. By commenting on how the Web is now structured by commercial imperatives, from order forms to biased search engines, these structuralist web sites use abstraction to invoke the socioeconomic reality of the material world. The 1930s Clement Greenberg would have been proud.

These and other works for the Web insist that electronic media occupy not a “virtual” space but a physical, global socioeconomic space. If one is an on-line artist, given that only a tiny fraction of the world’s population has access to a modem, let alone up-to-date computers and software, it is a political materialist practice to build low-tech works. And when our computers fail us, they too give us a materialist reminder. When, due to low bandwidth or small hard drives or lack of fancy plug-ins or lost phone links, our digital media “fail” us, they are closest to reminding us of the physicality of the electronic medium. When a digital operation fails at the machine level, it is usually because its switches, rather than falling nicely into the on/off positions, register a “maybe”. That “maybe” is the product of electrons that abandon their regimented paths. This produces dire results for networked computers and guided missiles, of course. But the noise of a failed internet connection, for example, is a declaration of electronic independence. It grabs us back from virtual space and reminds us of the physicality of our machines. They remind us not only of the wave/electrons that interconnect all matter, but also of our connections with other humans and our shared less-than-perfect, less-than-virtual circumstances.