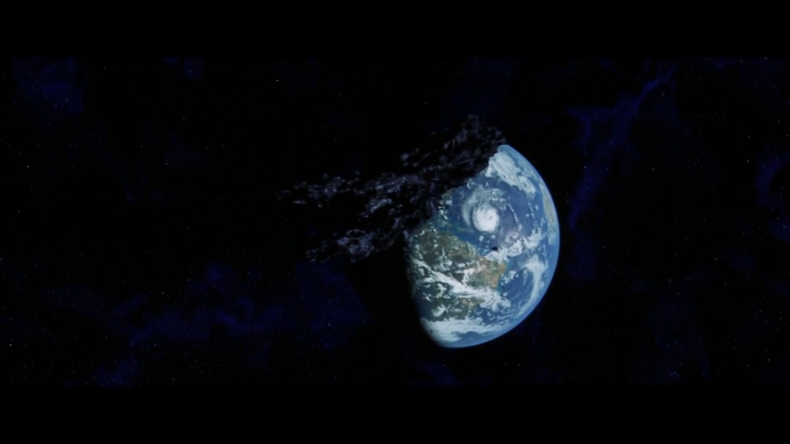 As the present millennium comes to a close, Hollywood filmmakers seem particularly enthralled by apocalyptic pictures, in which the end of the world appears imminent. Sometimes the end seems near due to meteors or asteroids heading our way, as in ARMAGEDDON (1998) and DEEP IMPACT (1998); and sometimes the end seems near because of alien invasion, as in INDEPENDENCE DAY (1996) or STARSHIP TROOPERS (1997). Because all these films are big-budget Hollywood pictures, a final apocalypse is avoided; and the earth is ultimately spared extermination. But in the process of saving the planet, one fact seems clear: it’s a man’s world, after all. When the future of the world is at stake, the role of women in the movies almost inevitably becomes more traditional; the women (provided that they have not already been eliminated) must wait, often helplessly, for the heroic male to take decisive action, and “do what a man’s gotta do”. Male dominance and female subservience are reinforced not only through the plot and actions of the main characters, but also through visual imagery.

One of the best (or, should I say ‘the worst’) examples of this type of gender representation can be found in ARMAGEDDON, one of two Hollywood films released in 1998 about the “Earth being menaced by big hunks of rock from Space” (Ferris). In the case of Armageddon, the source of danger is an asteroid roughly equal to “the size of Texas”, which is headed straight for us.1  The film’s misogynistic tone is established early on, when the asteroid is spotted by an amateur astronomer named Karl just when his shrewish wife Dottie is complaining that his “Stouffer’s pot pie is getting cold”. Note that Stouffer’s pot pie is something you simply heat up in the oven, requiring no cooking skills. When Karl tries to tell her that he’s busy looking at something interesting, and asks if she could retrieve his telephone book with the names of NASA scientists, she replies sarcastically, “Am I wearing a sign that says ‘Karl’s Slave’?” Apparently accustomed to Dottie’s insolence, he shouts at her, “Get the book! Get the book!” And apparently just as accustomed to Karl’s anger, Dottie gets the book. As the person who was the first to discover this particular asteroid, Karl is given the privilege of naming it; so immediately after showing particles of the asteroid destroying several Manhattan landmarks, the film cuts to Karl telling NASA without a trace of irony, “I want to name it after my wife, Dottie. She’s a vicious life-sucking bitch from which there’s no escape”.

That’s the last we see of Karl, as the action now focuses on “the world’s best deep-core driller”, the one man who may be competent and tough enough to save the planet from extinction, Harry Stamper [stamp her], played by Bruce Willis. Harry and his all-male crew of roughnecks are brought to the Johnson Space Center in Houston, and trained for a dangerous mission in which they will fly to the asteroid, drill holes through the rock, and detonate nuclear warheads to divert the asteroid from its collision course with the earth. Curiously, Harry is a single-parent, caring for and protecting his daughter, Grace (Liv Tyler). We never learn anything about Harry’s wife / Grace’s mother, except Grace’s kind words to her father, “I don’t blame you for my mother leaving. She left us both”.

Although in the U.S., single mothers (i.e. female householders, with no male present) outnumber single fathers by a factor of 3,5 to 1, the Stamper family defies the norm (U.S. Bureau of the Census, 1998, 838). Because Grace has fallen in love with one of Harry’s roughnecks, A.J. Frost (Ben Affleck), Harry the overly protective father must learn to let his “little girl” go.

Thus, while Harry is pounding and drilling into the asteroid’s iron-ferrite exterior, urging his men to “Dig, dig, dig. Chew this iron broad up”, Grace sits in the Houston Space Center, staring blankly at the video screen, waiting for her men to return, while the music plays, “I Don’t Want to Miss a Thing”, recorded by Aerosmith, featuring Steve Tyler, the real-life father of Liv Tyler. The only other major female character in the film (Co-Pilot Jennifer Watts) is equally useless; unable to fix a malfunctioning engine, Jennifer is rudely shoved out of the way by a Russian cosmonaut, who fixes the problem (in typical male fashion) by madly banging on the engine thrusters with his wrench. In the end, Harry sacrifices himself so that the earth will endure, telling A.J. to “take care of my little girl”. And that’s how the film ends: the planet has been saved, and as the final credits appear on the screen, we see close-ups of Grace with a big smile in her white wedding gown, getting married to A.J., tossing the bouquet and eating the cake. The men have saved the world; the women become their brides.

The dominant role played by “boys and their toys” may not be surprising, considering some of the statements made by Armageddon’s boyish director, Michael Bay, who told the New York Times, “I love doing big films. It’s an awesome experience. You have all these toys. ... It’s a really cool feeling” (Sterngold). However, in the case of DEEP IMPACT, where the director, Mimi Leder, was female, one might expect to find a much greater sensitivity to the representation of women. Unfortunately, this was not the case.

Admittedly, one of the film’s leading characters is Jenny Lerner (Tea Leoni), the television reporter who is the first outsider to uncover the government secret that a comet (this time, it’s the size of New York City) is on a collision course with the earth. However, as in Armageddon, when it comes down to earth-saving action, the men (specifically, the widowed pilot Spurgeon ‘Fish’ Tanner) save the day, while Jenny is rendered surprisingly inactive. She could have accepted her spot as one of the lucky 200 000 Americans pre-selected to live in a deep cave in Missouri, thereby ensuring that she would survive the Extinction Level Event (given the feminine name of Ellie). But Jenny suddenly gives up her spot, so that she can be reunited with her father, Jason Lerner (Maximilian Schell), and stand by him (cf. ‘Stand By Your Man’) on the North Carolina beach while a gigantic tidal wave engulfs them and the entire Atlantic seaboard. One reason Jenny has joined her father in the end is that his new wife, Chloe (only two years older than Jenny), has proved herself unfaithful, abandoning her husband so that she can spend her last days on earth with her own mother instead. Like Harry and Grace in Armageddon, the Jason-Jenny combination in Deep Impact reaffirms male superiority in the relationship of fathers with daughters, and effectively erases the role of the mother. Unlike Grace, Jenny does have a mother, Robin Lerner (Vanessa Redgrave), but she is as portrayed as unstable and ultimately lacking courage (like Jenny’s stepmother, Chloe). Hearing the news that people in the general population over the age of fifty will not be allowed inside the deep cave, Robin chooses suicide instead. Moreover, the only photographs of Jenny as a child show her happily playing on the beach with her father. “Where’s Mom?” wonders Jenny. Jason replies, “Behind the camera”. The family was all alone on the beach, and “there was no one else to hold the camera”. Whether or not this is Mimi Leder’s sly way of explaining why she (as the actual woman “behind the camera”) has rendered the women in her film invisible, is impossible to say.2  But Tea Leoni’s personal view of her character’s father-daughter relationship seems decidedly traditional. “What I particularly respected in the script was that my character wasn’t mad at her dad; it wasn’t a volatile relationship. ... You know, you can only be an ‘iron lady’ throughout as long as there isn’t a comet coming. If you’ve got a comet bearing down on Earth, you have to ask yourself, ‘What good is it, anyway?’ So we come to the idea of this woman of the 90s. She knows exactly what she wants, but more than almost anybody else in the film, she needs this comet” (Brooks 1998, 36).3

Leoni’s musings on the “woman of the 90s” seem to be the same conclusions reached by Connie Spano, the most prominent female character in Independence Day. When the film opens, Connie is working in the White House: a successful and ambitious advisor to President Thomas Whitmore. Three years earlier, Connie had been married to David Levinson, a brilliant but decidedly unambitious computer nerd (who “spent eight years at MIT to become a cable repairman”, in the words of his father), but divorced David so she could further her career. Sounding very much like an ‘iron lady’, Connie tells David, “It was the biggest opportunity of my life. I wanted my life to make a difference. I wanted my life to mean something. Haven’t you ever wanted to be part of something special?” By the end of the film, however, the roles have been reversed. David discovers a way to weaken the aliens’ defense by infecting the mother ship with a computer virus. While Connie waits helplessly back on earth, David is performing heroics in space; and when he returns as the conquering hero who has saved the world from destruction, Connie runs to stand by her man.4

Similar anti-feminist messages are communicated both narratively and visually in STARSHIP TROOPERS, as the earth is endangered by an invading army of intelligent Bugs. Although the “male and female [human] soldiers fight, shower, and bunk together with comradely nonchalance” (O’Hehir), the most capable females, such as Dizzy Flores (Dina Meyer) are eliminated along the way, while the men – notably Sgt. Zim (Clancy Brown) and Lt. Johnny Rico (Casper Van Dien) – achieve military victory by capturing the Brain Bug in a climactic battle.

One thing that all four of these films have in common, other than their anti-feminist messages, is commercial success. INDEPENDENCE DAY was the top-grossing film of 1996 (and ranks among the top ten box-office successes of all time), and was even endorsed by both presidential candidates during the 1996 campaign. STARSHIP TROOPERS, ARMAGEDDON, and DEEP IMPACT were more modest successes, exceeding their production costs ($100 million, $140 million, and $80 million, respectively) through domestic ticket sales alone, and even more money in overseas distribution (Bannon).

Admittedly, if I had looked hard enough, I might have been able to find four current Hollywood films, in which male dominance and female subservience are challenged. I believe, however, that these four science fiction films are more typical than not of the ways in which gender roles are portrayed in contemporary Hollywood productions. As critics have noted, “the entertainment industry has a long tradition of giving mothers short shrift, what with television’s statistically unsupported fascination with single dads, dating back to the 50s”, and focusing instead on sensitive single fathers (Handy). In the late 1990s, even as women in the U.S. may be gaining ground in political and economic terms, the images and representations in contemporary popular films are sending contrary, if not also reactionary, anti-feminist messages.